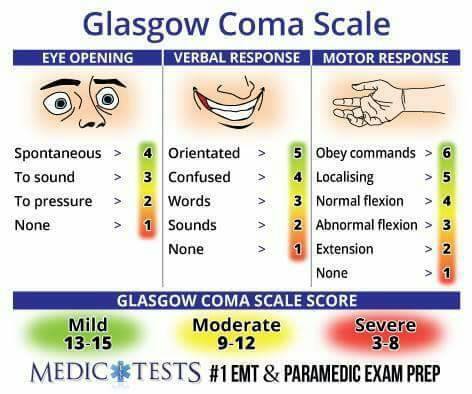 The Glasgow Coma Scale (GCS) is used to describe the level of consciousness in an individual.

It is often used to gauge the severity of an acute brain injury due to trauma or medical cause. The test is simple, reliable, and correlates well with outcomes following brain injury. It is composed of 3 domains which are assessed separately and given numerical scores. The sum of these scores is the Glasgow Coma Score.

The three areas are

There are some GCS scores that are significant and must be memorized:

Modifiers are used to eliminate misleading scores--it's all about accuracy, especially as it pertains to outcomes. For example:

A child's reaction to his own health crisis will not be the same as an adult's. Understanding commands and cooperating with them can be compromised due to pain or immaturity.

The GCS is not well validated in children and cannot--as a sole indicator--predict the need for airway interventions. The best approach in considering intubation for childhood trauma is to assess for valid indications for intubation, such as a child who cannot maintain his/her airway (determined with phonation and swallowing, not just the gag reflex).

A separate Pediatric Glasgow Coma Scale was created because young children can be harder to assess for verbal and motor function as they may not have the ability to answer your questions or follow instructions adequately. 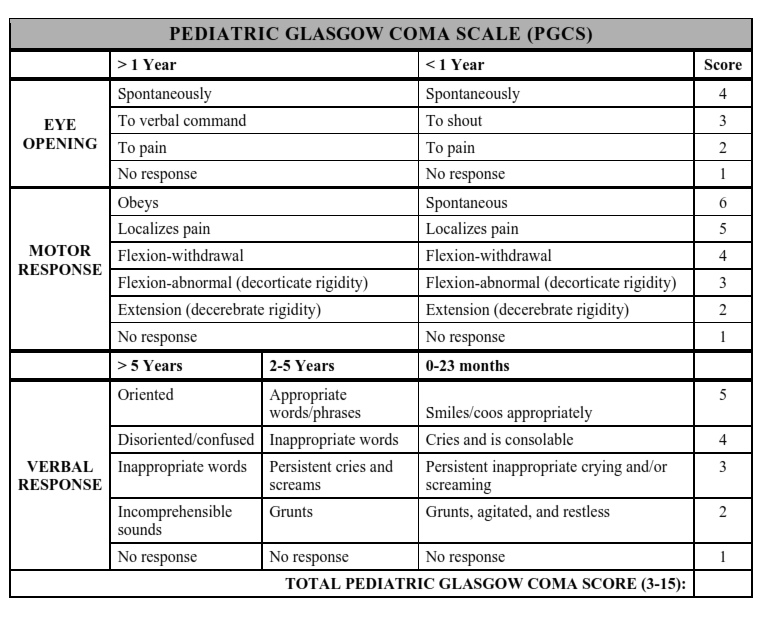 We are assessing responsiveness because being able to react to stimuli means the brain is working.

There are 3 questions: 1) Do his eyes respond?  2) Does he verbally respond? 3) Does he respond with his body?

Instead of writing GCS score to begin with, just start PRACTICING with using E4, S5, M6.  Get in the habit of looking at a patient and judging his response. If he's totally responsive, he's E4, S5, M6. If he's a little confused, like after a concussion, but his eyes open and he has purposeful movements, then you only have to take 1 from speech. So the confused guy is E4, S4, M6.

Use it like a checklist. Do his eyes open? If yes, then score a 4. If no, then score a 1. If "kinda," then look at the criteria. Same with the other 2. Check yes or no or kinda. If "kinda" then check out that specific list and proceed.

DO HIS EYES OPEN? (Max 4) (Eyes are easy, you're assessing eye AVPU)

IS HE TALKING CORRECTLY? (Max 5)